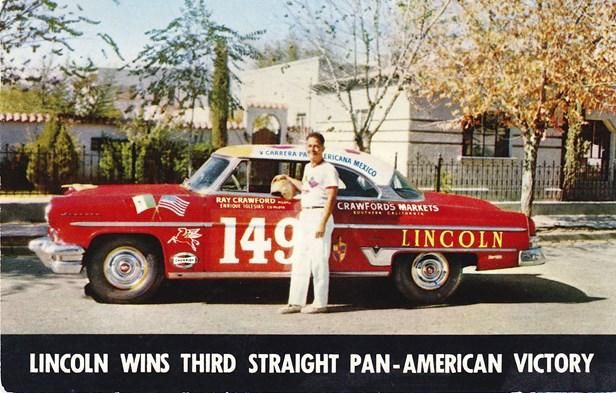 The only known surviving “Road Race Lincoln,” a 1954 Lincoln Capri that took first place in the 1954 Carrera Panamericana race, is on display at the Lincoln Motor Car Heritage Museum from July 15 through September 15.

The car, which finished first in the Big Stock Car class, is on loan from the National Automobile Museum/Harrah Collection, where it is part of the museum’s permanent collection.

The 1954 Lincoln was the highlight of the second annual Lincoln Homecoming event held August 10-14 at the museum, which is located on the Gilmore Car Museum campus in Hickory Corners, Mich.  The weekend events included an exhibition of Lincolns on August 13, preceded by tours and other events on August 11-12.

“Starting near the Mexican-Guatemala border, the five day race followed a route that climbed 10,486 feet next Mexico City and extended hundreds of miles over mountains and plateaus, according to museum research,” said Jackie Frady executive director of the NAM/THC, which is located in Reno, Nevada. “It was driven 1,908 miles at an average speed of 92.22 mph in 20 hours, 40 minutes and 19 seconds.” 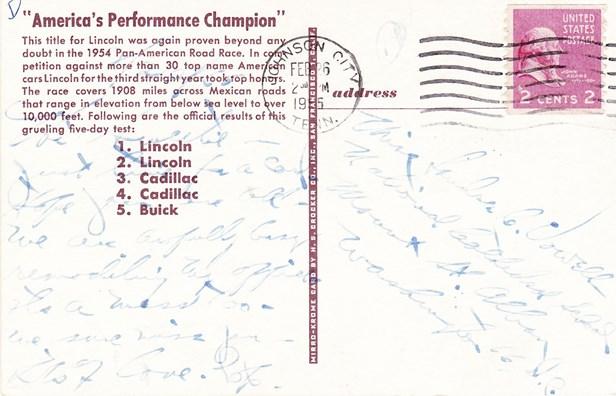 Driver of the 1954 winning car was Ray Crawford. Lincolns came in first and second that year and finished in the top four places in 1952 and 1953!

The 1954 winning Lincoln ended up in the famed Harrah Collection because the Panamericana Mexican road races were such important races in the history of the automobile and this was one of the original Lincoln team cars noted Frady.

“We are delighted and honored that the National Automobile Museum/Harrah Collection is loaning this car to the Lincoln museum,” said David Schultz, president of the Lincoln Motor Car Foundation.  “The car was the centerpiece of the second annual Lincoln Homecoming in August, which was hosted by the Road Race Lincoln Registry (RRLR)  It’s one of the four Lincoln clubs that supported building the museum, which opened in August 2014.”

The RRLR was founded in 1972 to recognize the Lincolns that dominated the Mexican Road Races from 1952-55. (The other Lincoln clubs are the Lincoln Owners Club, Lincoln-Zephyr Owners Club and Lincoln & Continental Owners Club.)

The 1954 Lincoln racer features a 205 horsepower Lincoln V-8, but no power steering or power brakes. It’s essentially a stock Lincoln automobile—a big car, which made it ideal for the very rough roads it encountered.

The new 1954 Lincoln engines were blueprinted, dual shock absorbers were used at the front with airlifts at the rear, and the rear ends were raised four inches for better control. Six-ply tubeless tires were new for 1954, inflated with nitrogen to maintain constant pressure despite temperature changes. Twelve-inch ribbed brake drums replaced the stock 11-inch plain drums. (Power brakes were available in 1954, but were not used on the Lincoln race cars.)

Seven factory Lincolns were entered, out of a total of 13 Lincolns. By the end of the first day, the Lincolns operated by drivers Mantz, Murphy and defending champion Chuck Stevenson were out due to burned pistons from bad fuel. McGrath drove his Lincoln over a cliff and buried it in the jungle. Lincoln again took the stock car class, with Ray Crawford placing 1st in car 149, a private entry, and Walt Faulkner placing 2nd in car 103, a team car. Lincolns also placed 10th and 11th. There were a total of 26 starters and 13 finishers in the large stock class. The winning Lincoln averaged 92.3 mph over 20:40:19 hours.

Another highlight of the weekend was an appearance on August 13 by author Andrew Layton who recently authored “Ray Crawford: Speed Merchant. He personally autographed copies of the book.

Click here for additional information on the 2016 Lincoln Homecoming.